You may be wondering what qualifies as “interactive glass.” When it comes to the future of glass in automobiles, some of the most talked about interactive trends include touch screen windshields and switchable glass (glass that goes from opaque to transparent). 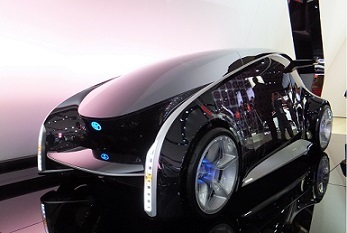 Interactive glass products have been in demand in the electronics industry (cell phones, tablets, laptops) for some time now, but it may not be long before we start seeing the automotive industry follow suit.

Once touch screens become more ergonomic, we may start to see them as a common addition to the windshields of the future. Flat touch screens that are used today for driver/vehicle interactivity will evolve to be curved as they become larger and add more functionality.

But there’s more technology that has to be developed before we start seeing interactive windshields out on the roadways. Glass will have to be engineered to have the ability to master sensory inputs, such as sight, touch and sound to go beyond the ordinary glass that’s used for windshields today.

Incorporating auditory and mechanical responses will create a more profound interactive experience; one that allows drivers to get physical feedback without having to look at the screen and being distracted.

One of the big products gaining momentum in the automotive marketplace is switchable glass. With the touch of a button, drivers and passengers can instantly adjust the tint of their sunroofs to their preference, from very dark to completely clear even when the sunroof is closed.

Though no automotive manufacturer has begun to produce cars with switchable glass yet, some, such as Mercedes Benz, have incorporated it into their concept cars.

Advancements and Technologies of Windshields

Cars have evolved drastically since they became widely available in the early 20th century, embracing technologies along the way while addressing the needs (and safety) of drivers.

While the modern-day windshield may not be as sexy as the latest in-dash electronics or rear spoiler design, it too has made major strides in technology.

Windshields evolved rapidly in the first half of the 20th century, with windshield technology such as curved and panoramic wrap-around windshields coming onto the scene. Even laminated safety glass was introduced by the 1930s.

Laminated glass, which by modern-day standards consists of two pieces of glass sandwiched together with a plastic interlayer in between, is now used in all windshields of passenger cars. In fact, this has been the case for about a half-century. Through the second half of the 1900s and into the 2000s, cars continued to get lighter, putting an increased emphasis on the importance of auto glass from a structural standpoint. Now, auto glass is actually an important component in maintaining the structural integrity of the vehicle.

Safety, aesthetics and visibility continue to drive the improvement of windshield performance. However, many new technologies are now being experimented with and integrated into the windshield.

In addition to touch screens and switchable glass, the implementation of heads up displays are being developed for the windshield, so one day, drivers will never have an excuse to take their eyes off the road. Some of the newest developments in auto glass and technology were also on display at the 2017 CES Show.

What Is a Heads Up Display?

A Heads Up Display, also known as a HUD, is a small projector embedded in your dashboard. It projects information such as miles per hour and directions where your eyes naturally will be when driving—the windshield.

These devices are particularly popular in luxury vehicles such as Mercedes-Benz, BMWs and even some General Motors cars.

If your vehicle has HUD on your windshield, then the device is tied directly into your car’s computer. It displays information similar to what you would find on a navigation screen.

It can be set up to alert you to new calls, emails, or texts. You can view these notifications on your windshield as well. The device is designed to increase your safety. You are less likely to be glancing down at your dashboard panel if the information is readily available on your windshield.

Heads up displays were originally created for the aviation industry, according RoadandTrack.com.

If you’ve ever watched a fighter jet movie, you’ve likely seen these devices in action.

“First patented by the Royal Air Force during World War II, it enabled the de Havilland Mosquito to fly faster and easier at night,” according to RoadandTrack.com. “As jets evolved, so did advancements in instruments, flight computers and guidance systems. … In a fighter plane, with the enemy on your tail, having all that information right up front could mean life and death.”

Vehicles such as the Corvette have had a HUD system in place since 1998. It displays data such as g-forces, gear position and oil temperature.

Because the HUD works so closely with the windshield, it’s important to alert an auto glass company about this device when you need a windshield replacement.

The glass company can ensure you receive the correct windshield so your Heads Up Display continues to project clearly and efficiently.

When you find yourself in need of a replacement, visit Glass.com to find an auto glass service provider familiar with heads up display installations to help you.

Glass.com attempts to provide accurate information but cannot be held liable for any information provided or omitted.  You should always work with a licensed, insured and reputable glass shop that can assess your specific needs and local building codes and offer professional services. Never attempt to cut, install, or otherwise work with glass yourself. All content is provided on an informational basis only.

An A-Z glossary of all things glass-related.